On Friday 10th January the ‘Oil on Canvas’ exhibition opened at the Dunedin Community Gallery. Artists from all over the country displayed their works, exploring the theme of deep sea drilling in Aotearoa.

My work for this show included a series of nine prints with drawings using a ‘kitchen lithography’ process that works on the basis that oil and water doesn’t mix. The imagery played out a noughts and crosses game where x = water and o = oil. Either had the chance to win but water was given the victory in the final image. The drawing sketches made reference to Hieronymous Bosch’s painting ‘The ship of fools’. 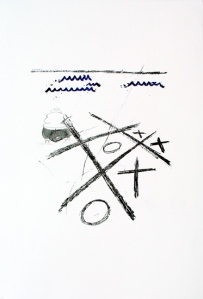 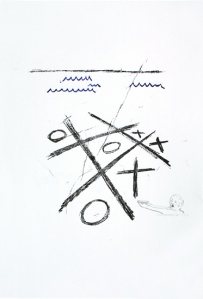 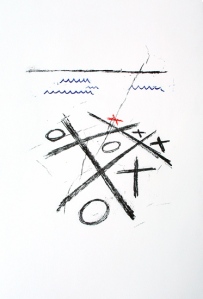 Along with this print series was a found object, sculptural work from my first year sculpture project, consisting of an old petrol can with an Arabian proverb written in reverse and a car rear view mirror lying beside the can to make the proverb comprehensible.

“My father rode a camel. I drive a car. My son flies a jet-plane. His son will ride a camel.”