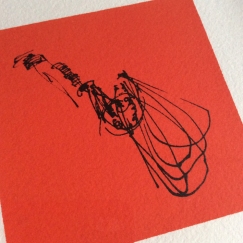 Kitchen Drawer is a series of solar etchings and screenprints displayed on a screenprinted wallpaper. This work pays tribute to my mother for her dedication to provide daily meals on the table. With limited electric gadgets available during that time, this work acknowledges the labour of love involved in food preparation. I hope that, in her old age, she gets the quality of care she deserves. The Kitchen Drawer series is a response to concerns for the care of our aging population in light of decreasing funding and standards of food quality in the public health system.

To celebrate Neil Emmerson’s 10 years at the P Lab, we hosted a group exhibition in the Dunedin School of Art gallery in May 2017. Current students came together with DSA Print Studio graduates and staff from the period 2007 – 2016.

Video footage taken during the Art  Future exhibition was edited and screened in X Rated. Works from the exhibition can be viewed on the P Lab website.

As an addition to the original coaster, these coasters show the dairy cow, the for sale sign, the milk treatment plant, the no swimming sign and the swallows. This work revisits my 2014 work exhibited in ‘Wansolwara’ in 2014 and highlights the pressing urgency regarding the health and condition of NZ’s waterways.

The New Zealand Government recently released a report proposing 90% of rivers and lakes in NZ are to be swimmable by 2040 with dairy cattle to be excluded from most lakes, rivers and streams as of 1st July 2017. Lets hope that one day we and our future generations can enjoy and feel safe to swim in our rivers again. 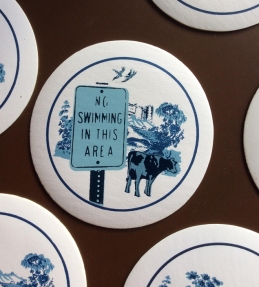